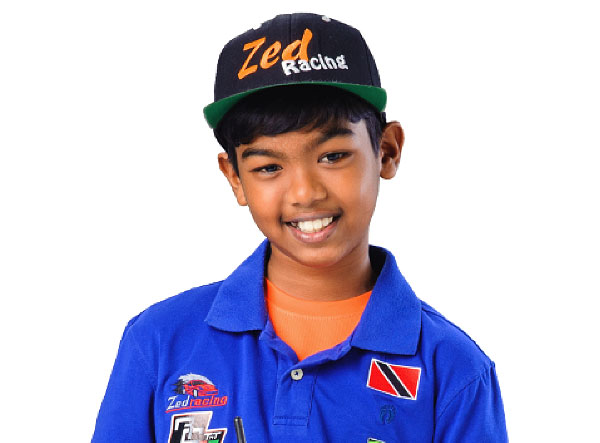 Eleven year old Zameer Paul Ramoutar surely does have a special skill when it comes to model car racing. The Standard 4 student of Siparia Union Presbyterian School started when he was just a toddler. His father bought him Hot Wheel cars, which he enjoyed driving and racing. Then at 5 years old he started actually driving model cars. After his first attempt, his father was surprised at how well he drove.

As a special birthday gift, his parents bought him a 2wd Traxxas Slash after which he participated in his first model car race meet. There, he received the award for Rookie of the Day and also placed 2nd in his class. At a Radio Controlled Model Organization of Trinidad and Tobago (RCMOTT) event held at Couva, he was also chosen as the Rookie of the Day. Now, Zameer drives a 1/8 scale nitro both On-road and Off-road. Zameer, though, prefers off-road racing because it has jumps, and his X-Ray buggy drifts around the corners, but also because it reminds him of rally car racing.

One of Zameer’s greatest achievements in model car racing, was winning the Siparia Grand Prix / King of Siparia in 2015. Even after having a bad start due to the electronics in his car being burnt out, he was still able to win the Siparia Grand Prix. In the standing for 2016, he ranked 2nd overall in Off-road and 5th in On-road. In 2016, Zameer took part in the Regional On-Road Championship in Ecuador where he placed sixth overall. In that same year, he also went to Las Vegas to compete in the 2016 IFMAR Worlds Off-Road Championship. In January, 2017 he placed 9th at Pan Am GT, held in Miami.

When asked what the secret is to his success, Zameer states it’s simply just focusing on the race, being patient and listening to his pitman. He states his inspiration to be the best driver that he can be, comes from his parents, Jerome Gafoor, the former Chairman of RCMOTT and his grandparents. Of course, Zameer one day sees himself becoming a Pro Driver.

You may consider 11 year old Makaira Wallace, a swimming…