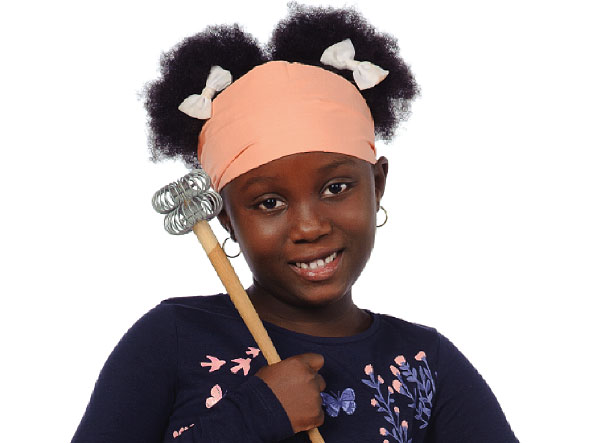 Seven year old Nikoya Sebro has always been a quiet, humble child, always eager and willing to learn. At the age of three, she began to show interest in what goes on in the kitchen, as she kept on the heels of her aunt. It was here she began many lessons with a butter knife and a rolling pin making butter cookies, one of her favourite snacks. Even at Christmas time, instead of asking for the traditional gift of a doll as most girls her age would do, Nikoya was asking for a cutting board and knife set!

About a year ago, she was introduced to cake making and made her first sponge cake on Mother’s Day for her grandmother. After that, she began making cupcakes in chocolate, vanilla, and banana. She takes her baking seriously too, as she has baked goodies for Shurwayne Winchester, Nailah Blackman, Krave Photos, The Tobago Drama Guild, the St. Philomena Spiritual Baptist Church and of course her family.

When she’s not filling orders, in her free time, she watches food-related YouTube videos and the food network channel, all with the aim of improving her skill. In fact, every month during her sleepover parties with her best friends, she practices those very dishes she would have seen.

Apart from her love of cooking Nikoya enjoys attending Spanish camp, representing her school in the Tobago Northside Spelling Bee tournament and spending time with her family.

But this little girl still has big dreams of owning her own restaurant. In fact, she saves all her money so that one day she can open “Nikoya’s Kitchen”. When asked which she wants to focus on cooking or baking she would always say “both!” And with a special lesson from her aunt always on her mind, that being “Dream It, Believe It and You can do it, and always have an adult with you in the kitchen” Nikoya knows that that anything is possible.

At just nine years old, Rayden Rampersad has made great…