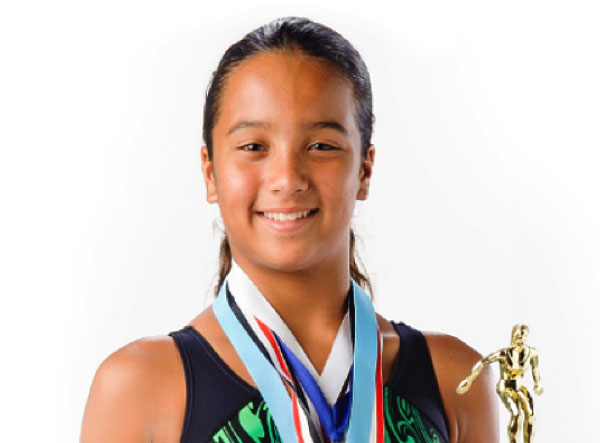 You may consider 11 year old Makaira Wallace, a swimming pro, at even such a young age. She represents her school, Dunross Preparatory School in the Milo Games, Water Polo, Swimming and Triathlon (MultiSport Series).

Her swimming has placed her in the Overall Top 3 at the ASATT National Primary Schools Swim Meet in 2014, 2016 and she placed first in 2017. As a swimmer for Areios Aquatechs Swim Club she placed 2nd Overall in her age group in the Torpedoes Short-Course Sprint Invitational in April

In the multi-sports, she has been participating in the Atlantic Primary School Series since the age of 8. She began by doing the swim leg of the relays for the triathlon and aquathlon then branched off into the individual events. For the 2016/2017 Atlantic Series, she took first place in the Aquathlon, Duathlon and most recently the Triathlon in May. She placed first in her age group in the Massy Rainbow Cup Triathlon 2017. Makaira is also on the Trinidad and Tobago National Team for CARIFTA Games Triathlon which takes place in Barbados in October.

But she doesn’t limit her water activities to just swimming. Makaira also enjoys the sport of fishing and has competed in the TTGFA Junior Angler Tournament for the last 3 years coming in the top 3 every year and placing first this past July.

Her aquatic accomplishments even extend to water polo where her water polo girls team this year claimed gold in the Primary School Tournament where she was an instrumental team member.

But don’t think that Makaira is only about water sports – she also does very well academically. In the past she has been awarded the Citizenship Trophy that was given to her through the voting of her classmates. She and her brother were featured in the I Love My Country Campaign for their recycling efforts.

Seven year old Nikoya Sebro has always been a quiet,…